“Wind’s in the east, mist comin’ in. Like something is brewin’ and ’bout to begin. Can’t put me finger on what lies in store. But I fear what’s to happen, all happened before.”- Bert, Mary Poppins, 1964

Brace yourself, Disney fanatics, there’s a whole lot of magic drifting from the winds of the Mary Poppins Returns set in the U.K.! A number of photos have rolled in this week to quench our thirst for the film’s development. And while what we’ve seen manages to keep a tight lid on the fine details of the story line, my goodness, has it been a treat to take in the actors fitted in full costume.

Sandy Powell–the renowned three-time Oscar winning costume designer whose credits include Disney’s live action Cinderella, Shakespeare In Love, The Aviator and The Young Victoria–is lending her midas touch for the film’s period piece wardrobe. Given the single shot above of actress Emily Blunt, who stars as Mary Poppins, audience members will fall in love with the detail placed in each clothing item. From the maroon hat, to the tailored coat, carpet bag and shoes, the richness of these fashions are sure to nab another Academy Award nomination. 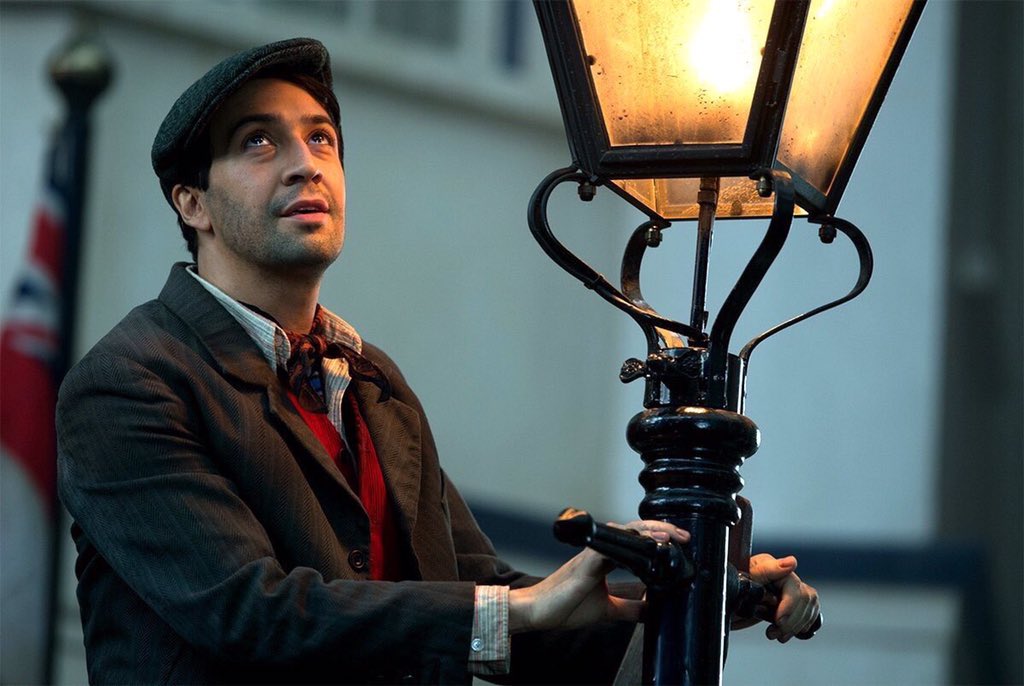 Lin-Manuel Miranda is also set to star opposite of Blunt in the role of Jack, the lamplighter. Rumor has it he’ll be writing new musical numbers along with Hairspray legends, Marc Shaiman and Scott Wittman. Julie Andrews on Mary Poppins Returns and Emily Blunt’s casting: ‘I have no issue with it. It’s not a re-creation of the original film, it’s a brand new one. I think she’ll [Emily Blunt] be practically perfect.’ Director Rob Marshall has also appointed his partner in crime, Dion Beebe, as cinematographer–the two have worked closely on additional musicals like Into The Woods, Chicago and Nine.

Yeah, Disney isn’t playing with this one. Rightfully so, as the timeless and cherished story has meant so much to numerous generations, no matter if their initial meeting with Poppins was through book or film. The P.L. Travers novel has stood the test of time for a reason, and her following, along with thorough Disney fans, wish to see this next installment handled with care. By the looks of what we’ve been treated with, it will.

Mary Poppins Returns is scheduled to hit theaters on December 25, 2018. A bit of a long wait, I know, but if your anticipation can be suppressed with the feed of additional information, read the synopsis for the film below. It’ll hold you over for a bit longer.

“Mary Poppins Returns” is set in 1930s depression-era London (the time period of the original novels) and is drawn from the wealth of material in PL Travers’ additional seven books. In the story, Michael (Whishaw) and Jane (Mortimer) are now grown up, with Michael, his three children and their housekeeper, Ellen (Walters), living on Cherry Tree Lane. After Michael suffers a personal loss, the enigmatic nanny Mary Poppins (Blunt) re-enters the lives of the Banks family, and, along with the optimistic street lamplighter Jack (Miranda), uses her unique magical skills to help the family rediscover the joy and wonder missing in their lives. Mary Poppins also introduces the children to a new assortment of colorful and whimsical characters, including her eccentric cousin, Topsy (Streep). -Disney