RANDOM: The History Of Webster Hall, The Not So-New-Home of Vashtie’s Weekly Party – 1992 (Facts & Photos via KeithYorkCity)

Okay, so if you made or you didn’t make it to the opening night of New York City’s latest and greatest in nightlife (HOUSE PARTY at WEBSTER HALL) – there are AMAZING facts you should know about the legendary nightclub WEBSTER HALL.

Take this fact for instance; Webster Hall has not only been a nightclub! It served as a recording facility for RCA Victor Records from 1953-1968. – where musical legends like; Louis Armstrong, Perry Como, Elvis Presley, Frank Sinatra, Tony Bennett, Bob Dylan and Lena Horne all recorded!

Webster Hall is a nightclub and concert venue located at 125 East 11th Street, between Third and Fourth Avenues, near Astor Place, in Manhattan, New York City. Built in 1886, its current incarnation was opened by the Ballinger Brothers in 1992. It serves as a nightclub, concert venue, corporate events center, and recording venue, and has a capacity of 2,500 people – including the club; 1,400 for the main stage.

The following text and photos via KEITHYORKCITY

“Beginning in 1870, the north side of East 11th Street in the East Village was dominated by the parochial school of St. Anne’s Roman Catholic Church. But in 1886, the congregation’s feathers were ruffled when a new building began construction next door and had the audacity to apply for a liquor license. It would be “intended for balls, receptions, Hebrew weddings, and sociables, and not a barroom,” the New York Times quoted. And despite the church’s protests, Webster Hall opened in February of 1887.”

“The new events hall cost roughly $75,000, which was a tidy sum in the 1880s. Its eclectic Queen Anne facade was swathed in ornate red terra cotta tiles; terra cotta gained in popularity after a series of devastating fires leveled much of Chicago and Boston, and buildings constructed using brick and tiles were found to have fared much better than any others.

A meeting of a garment makers union ca 1914
(NY Times)

Almost from the beginning, Webster Hall became known as a center for leftist, liberal political thought and action. An article in the Brooklyn Daily Eagle in 1888 stated, “Webster Hall … is a big, bare, dingy place, where all the year round discontented men meet to discuss their wrongs and sympathize with one another, and where secret societies and political organizations, labor unions and similar associations make a business of pleasure.”

By 1892, Webster Hall was doing so well that its owner, Charles Goldstein, began construction on a 3-story annex off its east side. The new wing would contain an apartment for Goldstein and his family, along with a saloon, restaurant, and ballroom. Charles died, however, in 1898, and the Hall shuffled through a series of lease and ownership exchanges for more than a decade until, in 1911, it suffered a devastating fire. The New York Times reported that, “all the upper floors of the hall were wrecked, with the damage estimated at $20,000.”

Following repairs, Webster Hall became widely known for its extravagant masquerade balls, which attracted the beginnings of Greenwich Village’s Bohemian subculture. Allen Church, in his 1959 book The Improper Bohemians, waxed, “So many dances-till-dawn and fancy dress balls were held there that one Villager said of himself and his wife: ‘We’ve sold our bed. Why sleep when there’s a dance every night at Webster Hall?’”

The event space also served a significant role in the development of New York’s early gay and lesbian scene. By the 1920s, gay men were organizing their own masquerades, where they were free to arrive in full drag. And their heterosexual late-night counterparts welcomed, and even encouraged, their presence at their balls and masquerades, as “they knew they enhanced the reputation and appeal of such events.” 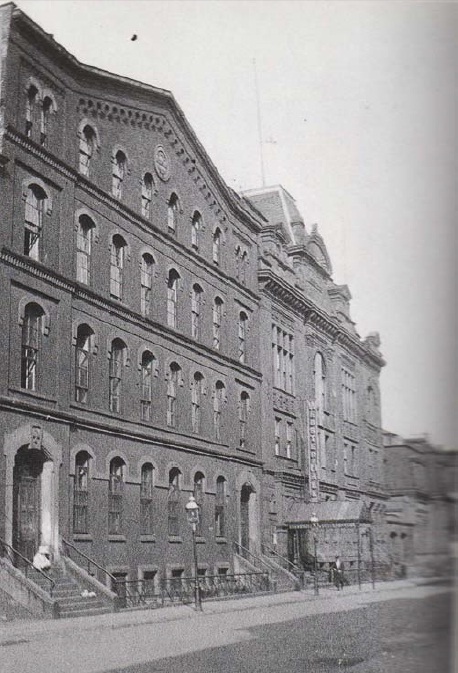 Webster Hall with its Catholic School neighbor in the foreground, ca 1900.

It still has its mansard roof and its 1892 annex is already completed on its far side.
(Museum of the City of New York)

Webster Hall continued changing hands thoughout the 1920s before being purchased by Wand Holding Co. Under their ownership, the building underwent $220,000 in renovations in 1928, and just two years later, suffered another severe fire. With repair costs ballooning above $200,000, the owners eliminated the building’s attic and accompanying mansard roof.

A repaired Webster Hall was leased out as event space beginning in 1932. In 1938, however, it was struck by yet another fire; this one lasted for hours and killed two employees. Even Mayor LaGuardia stopped to view the conflagration. The hall would be engulfed in flames yet again in 1949, when it was completely gutted. It seems to be a testament to its “fire-proof” construction that its exterior walls never failed.

Rising, yet again, from the ashes, Webster Hall became a recording studio for RCA Victor Records from 1953-1968. Music icons including Louis Armstrong, Perry Como, Elvis Presley, Frank Sinatra, Tony Bennett, and Lena Horne all recorded in the hall, whose famed acoustics were difficult to match elsewhere in the city. In fact, a young Bob Dylan played harmonica on a 1962 recording of Harry Belafonte’s album Midnight Special, marking Dylan’s recording debut. Webster also became a favored location for the recording of cast recordings for Broadway musicals. Julie Andrews, Ethel Merman, Carol Channing, and Liza Minnelli are but a few of the more notable names from the Great White Way who recorded at RCA’s Webster Hall studios.

Tina Turner performing at The Ritz in Webster Hall in 1983

Beginning in 1980, Webster Hall housed the legendary rock & roll venue “The Ritz,” which was routinely referred to as “the best stage in New York City.” U2 and Depeche Mode both made their American stage debuts at The Ritz, Sting made his solo debut there in 1985, and the stage also hosted a pantheon of rock legends including Aerosmith, Metallica, KISS, Black Sabbath, Run-DMC, Iggy Pop, Bo Diddley, Guns N’ Roses, and even Tina Turner and Prince. Scenes for both Raging Bull and Big were also filmed at Webster during its 1980s renaissance. 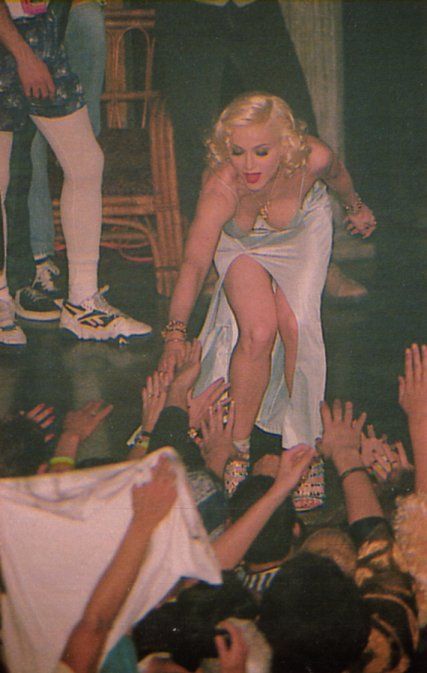 The Ritz moved out in 1990, taking up residence in the space vacated by Studio 54, and Webster Hall underwent a significant renovation. Reopening in 1992 with state-of-the-art lighting and audio equipment, Webster once again became a premiere performance venue for New York City. Madonna filmed a special concert at Webster in 1995, Bill Clinton hosted an event there, and it even played host to an episode of Iron Chef. The 21st century saw Webster partner with the Bowery Ballroom to bring even more great and emerging artists to the stage, including Linkin Park, Mika, John Mayer, Robyn, and Modest Mouse. 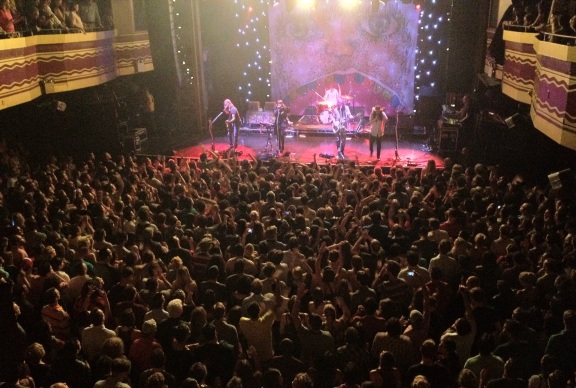 In 2008, Webster Hall was designated a New York City Landmark, protecting it from the wave of new development that has recently washed over the East Village. For more than 125 years, the little red event space whose liquor license so upset its Catholic neighbors has risen from the ashes of fires four times, served as a political sounding board, fostered the development of the Greenwich Village Bohemian movements and its gay subculture, and hosted virtually every major musician and recording artist of the past century. There is perhaps no greater venue in New York that is so grossly overlooked by the rest of the country.” 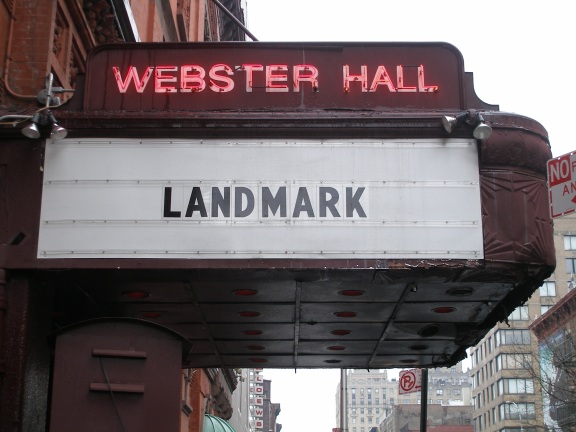